FFValidator: check if a recommendation is valid and how many points has gotten

Now you can check if a recommendation #followfriday is valid for the FollowFriday Ranking and how much it is worth for each recommended user, according to the new ranking rules. It is possible thanks to a new functionality that is available today in followfriday.com: the FFValidator, which lies just below the ranking by language. The tool has been created as part of followfriday.com policy to ensure the transparency of the ranking. 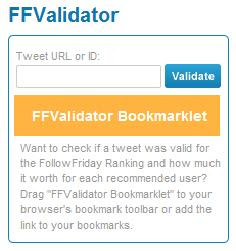 To see if the tweet is valid and how many points the recommendation has gotten you need to use the tweet URL. You can click on the time that the tweet was posted to get the URL. To facilitate verification, you can drag "FFValidator Bookmarklet" to your browser's bookmark. You can also press the right mouse button and add the link to your bookmarks.

This is an example of a not valid recommendation for our ranking, because it is a retweet. 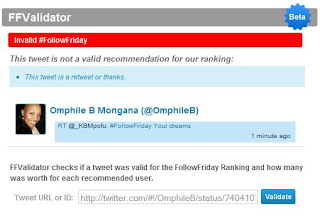 The FFValidator always gives an explanation why a recommendation has not been valid. Another example, but now a valid recommendation for the ranking. The two accounts have shared recommended total score tweet. 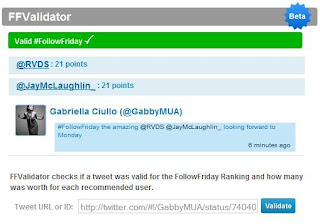 In the following case, there are six recommended profiles in one tweet, therefore the points are distributed equally to each of them. 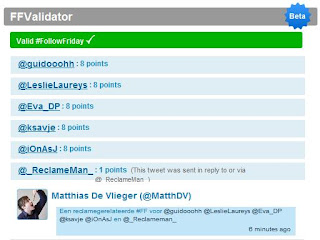 Posted by Leticia Polese at 2:47 AM