FollowFriday.com is a world ranking of Twitter organized by countries and languages. Like any ranking it’s interesting to be natural and free from manipulations. It is very hard to meet and get closer to every local community from our offices in Spain, in order to watch over the integrity of these rankings. Due to this, we have created a moderators program by countries to help us to look for the ideal people to become our link with the local community and watch over the quality of the recommended lists from every country.

Some countries have already their moderators. We’re grateful to them owe to their contribution and pioneer this initiative. 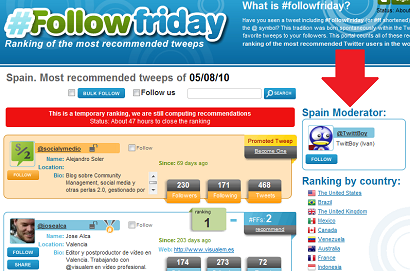 In this post, we want to explain some details about this program and launch this call to receive the candidatures by countries. Interested people can introduce their data in this form.

If you are interested to become one of our moderators fill in the following form: